Question is: Is it worth the money?

I kept figuring out some things here and also thinking about which camera lens I should start with for the 1st teardown and review. Meanwhile, I bought this macro lens and after just a couple days of use, it started making some weird noises. So instead of shipping it out I decided to fix it myself and make a teardown and review at the same time. So Tokina m100 is the first one, problem solved. Of course this will void my warranty, but I personally don’t care about it that much. If your lens is still under the warranty – don’t disassemble it. Ok, so a very quick overview of this thing. There is a manual aperture ring, there is also focus limiting switch and this is a very useful feature. Macro lenses are usually slow as a turtle when it comes to focusing speed and this one makes no exception.

This switch is mechanically dividing the full range of focusing mechanism into 2 parts, so you can use this lens either as a regular prime lens or as a typical close up macro lens. And in both cases it can make it focusing about 50% faster which is not bad. 9 blades diaphragm which is very nice, almost perfectly round and it’s mechanically controlled by this lever since it’s and Nikon mount. Optics are super clean which is usually, but not always the case with brand-new lenses. Also this is an externally focusing lens which means, that the front part moves in and out while focusing. It’s not great but as long as it doesn’t rotate while doing this, it’s good enough. And of course there are also MTF charts to compare and some other things, specifications and stuff like that, but since I don’t care about this – I’m not going to talk about it here. Let’s get to the problem. If I remember correctly there is a nice, thin ball bearing that goes all the way around the clutch mechanism. But probably that’s not where the problem is. It’s most likely somewhere here. My guess is that there is some grease missing inside this lens. Someone at the factory either got lazy or made a mistake. And even if they do have a great quality control at the factory, this type of problem is very hard to detect. That’s because most of those parts inside have some kind of paint on them or there is some residual grease that will make this lens work perfectly fine for some – usually short – period of time. Or maybe something else – let’s see. Now, as with most Tokina lenses I’ve seen so far. This is a very simple and solid construction. That’s why it’s so heavy. It’s a very simple construction when it comes to electronics also. Just a handful of SMD parts, an oscillator and an 8-bit microcontroller. There is also a manual focus switch and position encoder which I’ll show you later. This gear is getting engaged or disengaged, depending on the position of the focusing clutch mechanism. Let’s remove it now. Just a thin plastic shelll covering some solid metal alloy parts. Even though this clutch mechanism doesn’t feel right while I am rotating it, it’s most likely not directly related to my squeaky problem. So I’ll take care of it in a couple of minutes. Let’s see what we got so far. One of the nicest looking lens mounts ever. Is is very important? No! But still it looks so good that I just couldn’t resist mentioning it. It’s solid and quite heavy too. Plastic manual aperture ring – not much to it. Another plastic ring that goes under the lens mount. A thin plastic shell that goes over the clutch mechanism and the clutch mechanism itself. This is how it looks like when removed from the lens. And here’s the rest of this lens. 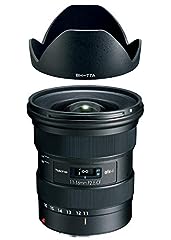 New design & lens coating for better perfromances (as of September 17, 2020 - More infoProduct prices and availability are accurate as of the date/time indicated and are subject to change. Any price and availability information displayed on [relevant Amazon Site(s), as applicable] at the time of purchase will apply to the purchase of this product.) 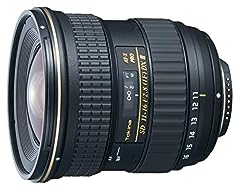 USA Version. 3 Year Tokina Warranty included. Intended for sale within the USA. Aperture Range: f/2.8 to f/22 Designed for Cameras with APS-C Sensors Two Aspheric Lens Elements Two Super-Low Dispersion Lens Elements Multi-Layer Coating 77mm Filter Th... (as of September 17, 2020 - More infoProduct prices and availability are accurate as of the date/time indicated and are subject to change. Any price and availability information displayed on [relevant Amazon Site(s), as applicable] at the time of purchase will apply to the purchase of this product.) 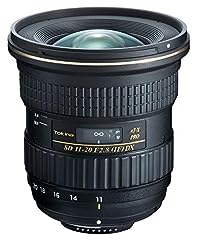 (269)
F-Mount Lens/DX Format. 16.5-30mm (35mm Equivalent) Aperture Range: f/2.8 to f/22. P-MO & Glass-Molded Aspherical Elements Three SD Ultra-Low Dispersion Elements. Multi-Layer Lens Coatings (as of September 17, 2020 - More infoProduct prices and availability are accurate as of the date/time indicated and are subject to change. Any price and availability information displayed on [relevant Amazon Site(s), as applicable] at the time of purchase will apply to the purchase of this product.) 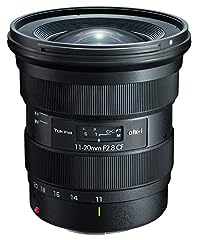 Max focal length: 20.0 millimeters New modern and comfortable design for better handling New coating providing oimproved reslution and efficient flare management Ultra-wide angle focal with constant F2.8 aperture Constant size whatever the focal and ... (as of September 17, 2020 - More infoProduct prices and availability are accurate as of the date/time indicated and are subject to change. Any price and availability information displayed on [relevant Amazon Site(s), as applicable] at the time of purchase will apply to the purchase of this product.)

How are focusing issues corrected with this lens ? I have one on my D750. The fine tune is maxed out at plus 20 but it is still not right. Is it a shimming correction possibly ?

I know it’s expensive but if you can ! Do more high end lens from Nikon

I bought this lens based on the Angry Photographer recommendation.
And by the way, I don’t agree with all his reviews but I will say he was spot on with this lens.

It is TACK sharp and for your ££ it’s money well spent. Used it on my D90 and was excellent but it came to life on my D750, the results I get with Portrait and Macro are really outstanding.

Solid and heavy , not the fastest at focus but worth the extra wait ! 🙂

thanx so much for making this channel 🙂 its helps me to know every weaknes of the lens, so i can use it properly and its also helping me to decide to buy these lenses or not (and for this case, yes i will take this 100mm tokina lenses 🙂

WOW! Just amazing video and boat loads of great info!
BTW, whois a good source that I can order a main board for the 5D2 camera, and how can I know if its a oem board vs a copy? Thanks!

Yes I agree, Exceptional video, 10/10. I will have this lens, soon so the video was very interesting, I hope mine is ok when it arrives. Thank you and subscribed also.

Awesome video! So informative!
Can you please make a teardown for the Canon 100mm Macro USM? That would be so great. No information available on this lens of mine so far.

Fantastic video work and detailed discussions regarding all your “Fixyourcamera” videos Mike.  I have just purchased a Tokina AT-X AF 80-200mm lens and it has fungus and dust down deep in the lens elements.  I would like to know how I could remove the parts, to get down to clean these components.  Cheers Wally.

This was great. Thank you!

I got this lens for my Nikon D3200 and the auto focus isn’t working at all. Do you know what I need to do to make it work?

Probably the best lens I have ever owned. Built to last a lifetime – awesome build and optics…! Just buy one…!!!

Love this video Mike. I’d love to learn to repair lenses but I can’t afford to fix the ones I use.

Can you suggest any very cheap lenses that would be good to practice on. And a list of essential tools you’d recommend having?

Keep up the quality videos!

AMAZING TEARDOWN. best I have seen in a while. Great Tips

Im just about to get this lens, and your video made me question the purchase. I was wondering if you have encountered another tokina 100mm lens that seemed to have the same problem? Or was this a rare case? Thanks for sharing! I really enjoyed how technical it was.

That was an amazing video!

It’s been a while since this video came out so you probably found it, but the cheap video microscope that would work for you is dinolite.

What an excellent video. Interesting, informative and extremely well filmed. Thanks. I look forward to watching more of your stuff.

Who the hell thumbs down this video? Why? Damn trolls.

If I decide to buy this lens, I hope I don’t have that squeaking problem. It’s either this, or the non-L Canon.

I was looking for a review on this lens and found your channel. WOW! You are awesome. You have one new subscriber, just because I love unassembling things, I just don’t have the skills to put them back together hehe. With that being said, know I won’t be doing this to any of my lenses anytime soon. I will be checking out your other videos later.

Dear Sir hello, I am using a Tokina 100 for the first time. Put it on my new D500, both lens and camera on autamic and button on limit. ISO on automatic and P program. It is low light but in the view finder the F EE is flashing? Can you please advise me. Thank you very much.

that’s why lenses are expensive… 🙂

Thank you so much for your video, your efforts! But really! This is PRICELESS that you cannot get from anywhere else!

I was decided to buy this Tokina 100m f2.8 after days of searching for a macro for my new dslr, but after watching your video and reading one of the below comment I am definitely not going to buy this lens. Such QC issues are like in low end China factories.

What do you use for lens grease?

Subscribed and liked! Thank you for this channel, we needed this 🙂

hello! mine has fungus in the front element, can i remove the front assembly without unscrewing anything? thanks!

A beautifully filmed and narrated video – top notch! Thank you.

My Tokina 100mm lost autofocus today. Out of the blue. Any ideas what might went wrong? I know about the af/mf lock, it is not it. Then after 10 trial today, I got it working again for another 10 seconds, and then again it died. Almost like it has connection issues.

Fantastic video, great narration and I’m a tad envy of your skills, it seems to be a very rewarding vocation. Keep up the great work, it’s fascinating to see the working internals of camera equipment.

Awesome vid! I really hope you could answer this question: will the autofocus work on my d5300?